The regularly scheduled meeting of the Paducah Amateur Radio Association was held Monday, February 8 at the WKCTC Emerging Technology Center in Paducah, KY.  A prediction of snow showers for the evening did not deter approximately 20 members.  There was much anticipation for the presentation to be given by Dave Perry (N4QS) later in the meeting.  It was ironic that Dave’s subject about emerging technology in amateur radio was to be presented at the Emerging Technology Center . See presentation info below.

The meeting was opened by President Jeff Wielgos (KB9BVL) followed by the treasurer’s report given by Bruyce Huyck (KS4V) which was subsequently approved by the members.  Then Secretary Ron Cowherd read the minutes from the January meeting, also accepted by the members present.

President Wielgos touched on an item from the January meeting in which it was    suggested that the club may want to look into the possibility of participating in the ARRL National Parks On The Air (NPOTA), a year long event.  After some discussion it was decided that we should look into the rules to determine whether Paducah’s “foot of Broadway” location qualifies as an activator spot on the “Trail of Tears.”  It was decided that we have all year to look into the matter to properly plan for this event during a warmer a time.

Liability Insurance.  Bruce Huyck reminded us that it was time to pay the club liability insurance in the amount of $240.00.  A motion was moved, seconded and passed to pay for the insurance.

Treasurer Huyck requested that an additional person’s name be added to the checking account to provide check writing continuity in case he, for some reason, he wasn’t available to write a check.  It was suggested that the secretary would be the likely person.  Ron agreed to the request.

Past treasurer Paul Smith announced that the web domain fee would be due later this year.  He suggested that the present web master’s name should appear on the application before the due date for fee payment.  Ron Cowherd agreed to contact past web master, Rob Larrison, to get the account in order.

Secretary Cowherd read a letter addressed to Kevin O’Neill who is Dir. Community Education West Kentucky Community & Technical College.  The intent of the letter was to thank him and WKCTC for the use of the Emerging Technology Center facilities this past year.  The letter gave a brief description of PARA’s purpose and goals as an organization as well as short list of our educational and public service events in which we have participated.  It is our hope that PARA may continue to use the facilities throughout 2016. 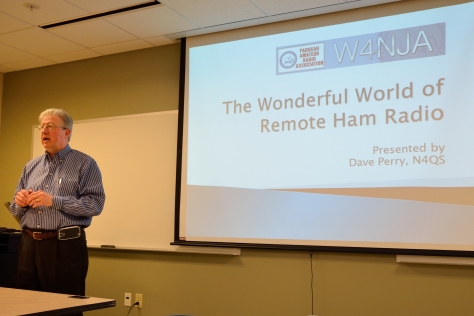 Dave Perry, N4QS gave us some very exciting news about new software for remote control of a local or distant amateur radio station.  This “free” cutting edge software requires only (1) an internet connection, (2) smart phone, tablet or laptop, and (3) client software from www.remotehams.com.  Dave demonstrated by using his smart phone to control his station at home.  He was able to control all aspects of the process by clicking on the knobs and buttons shown on the screen of his phone.  It was amusing when he accidentally touched the CQ macro button on 80 meters CW and a DL station from Germany came back to him with a 5/9 signal report.  Dave stressed how easy to install and user friendly the software is.  Unfortunately the software does not work on any Apple products at this time.

Nice job Dave.  Your enthusiasm was infectious.  Several of the club members with laptops with them, were signed up and had the software installed before the end of the meeting.

PARA meets at Emerging Technology Center, WKCTC on 2nd Monday, 7 pm of each month except December.

New License and upgrades are offered on odd months throughout the year.  See W4NJA web site at w4nja.org.  For info click at the top of the page on About Us, then VE License Testing.